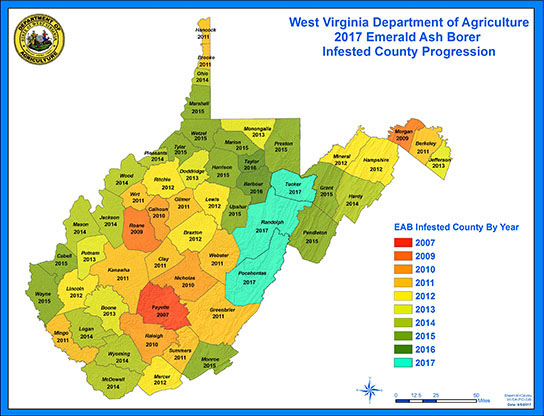 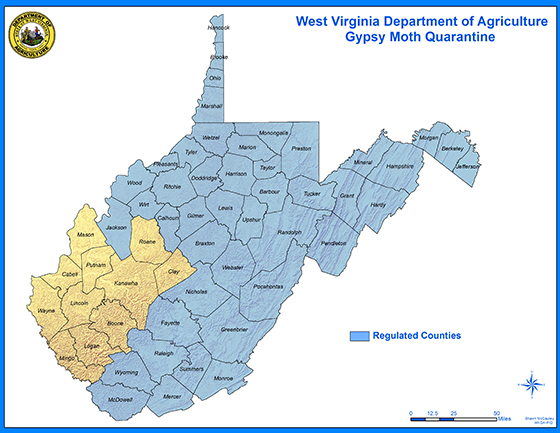 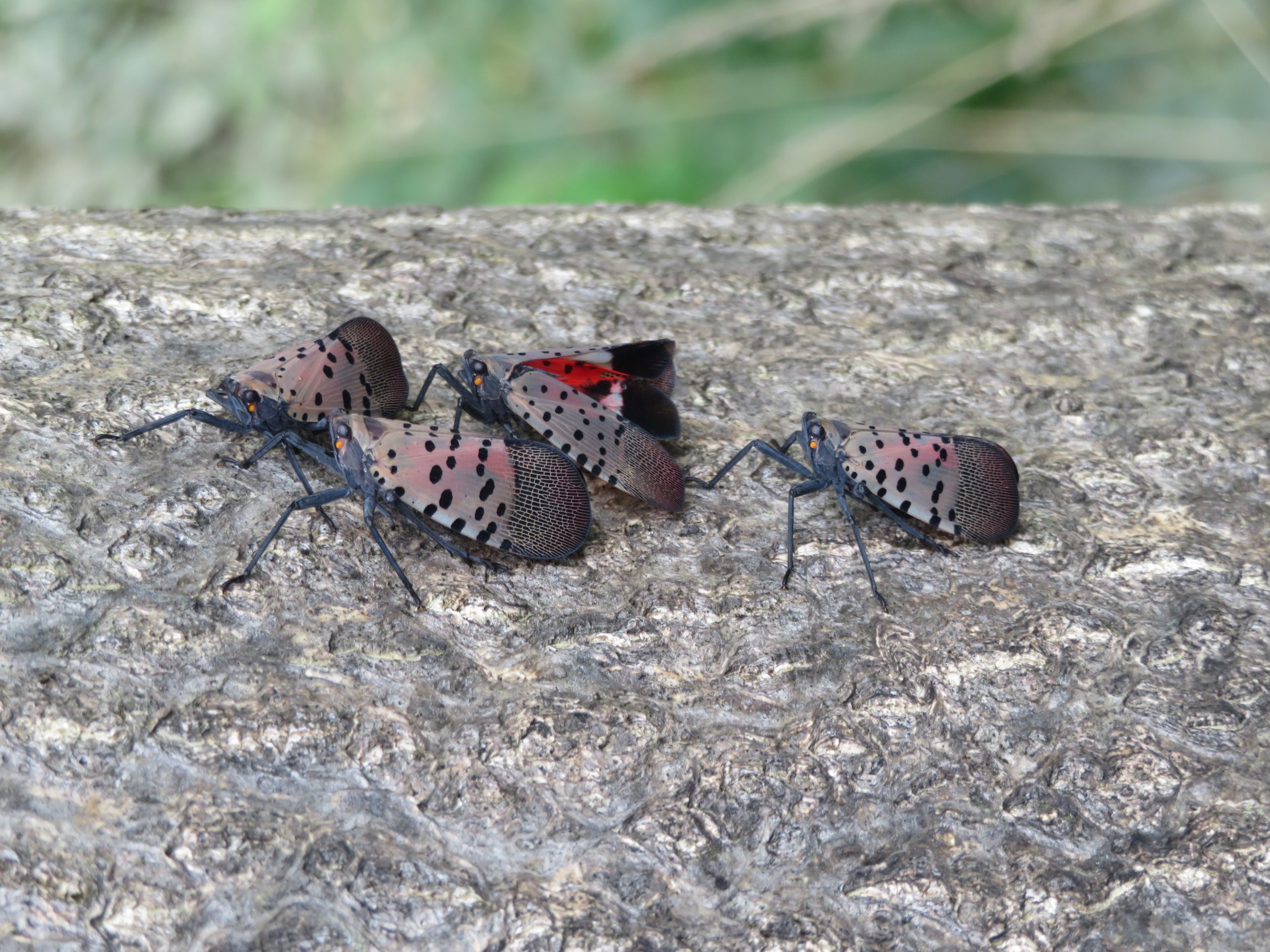 Spotted lanternfly adults aggregating on a tree-of-heaven stem. Adults are present in late July to October.

The spotted lanternfly (scientific name Lycorma delicatula) is an invasive insect native to Vietnam, India, and China which has rapidly become a nuisance pest in the Mid-Atlantic region of the United States. It was first detected in Berks County, Pennsylvania in September 2014 and since then has spread across Pennsylvania and to many of Pennsylvania’s neighboring states, including West Virginia.

Spotted lanternfly has the potential to infest over 70 species of trees and vines. Its primarily known to infest the exotic and equally invasive tree-of-heaven (scientific name Ailanthus altissima) but has been detected on many of West Virginia’s native tree hosts where it has the potential to cause severe economic and ecological damage. 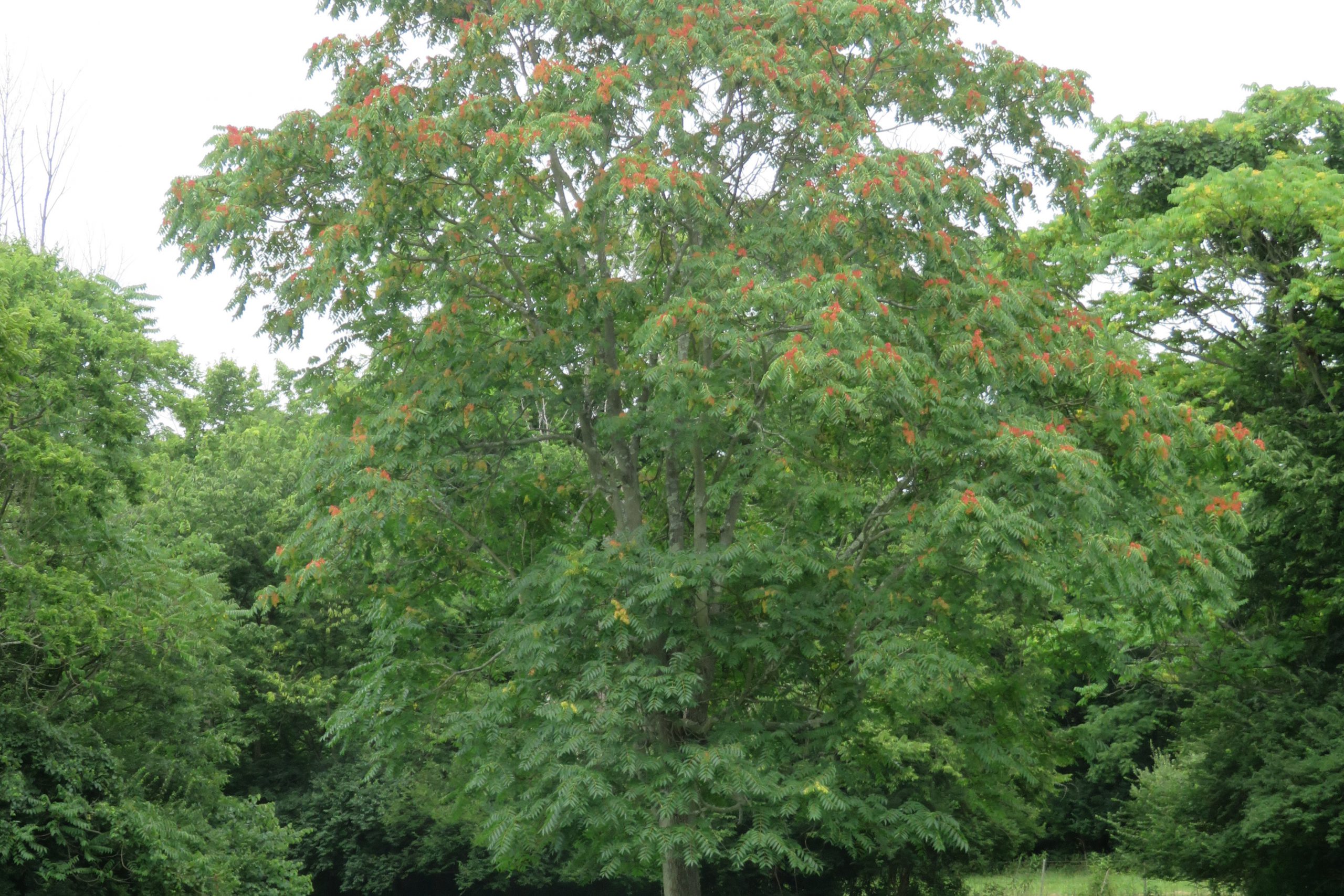 Hosts include a wide range of fruit, ornamental and forest trees and vines, including: grape, apple, plum, cherry, peach, nectarine, maple and walnut. All of these hosts play an important role in the economy and ecology of West Virginia. Spotted lanternfly damages the plant host in two ways, 1) by sucking out the sap and weakening the plant and 2) by creating “honeydew” which increases the occurrence of sooty mold. Sooty mold blocks sunlight and inhibits photosynthesis; a vital process for orchard trees and vineyard vines to produce fruit.

As seen in Pennsylvania over the past several years, spotted lanternfly can spread rapidly when introduced to new areas, especially if major highways, railways or rivers are in proximity of the introduction site. The key to controlling the spread of this invasive pest throughout West Virginia will be early detection and prompt eradication efforts. Eradication efforts include physical trapping of the insect in all life stages, removal of tree-of-heaven and continued monitoring by the West Virginia Department of Agriculture and citizens for new populations and egg masses. 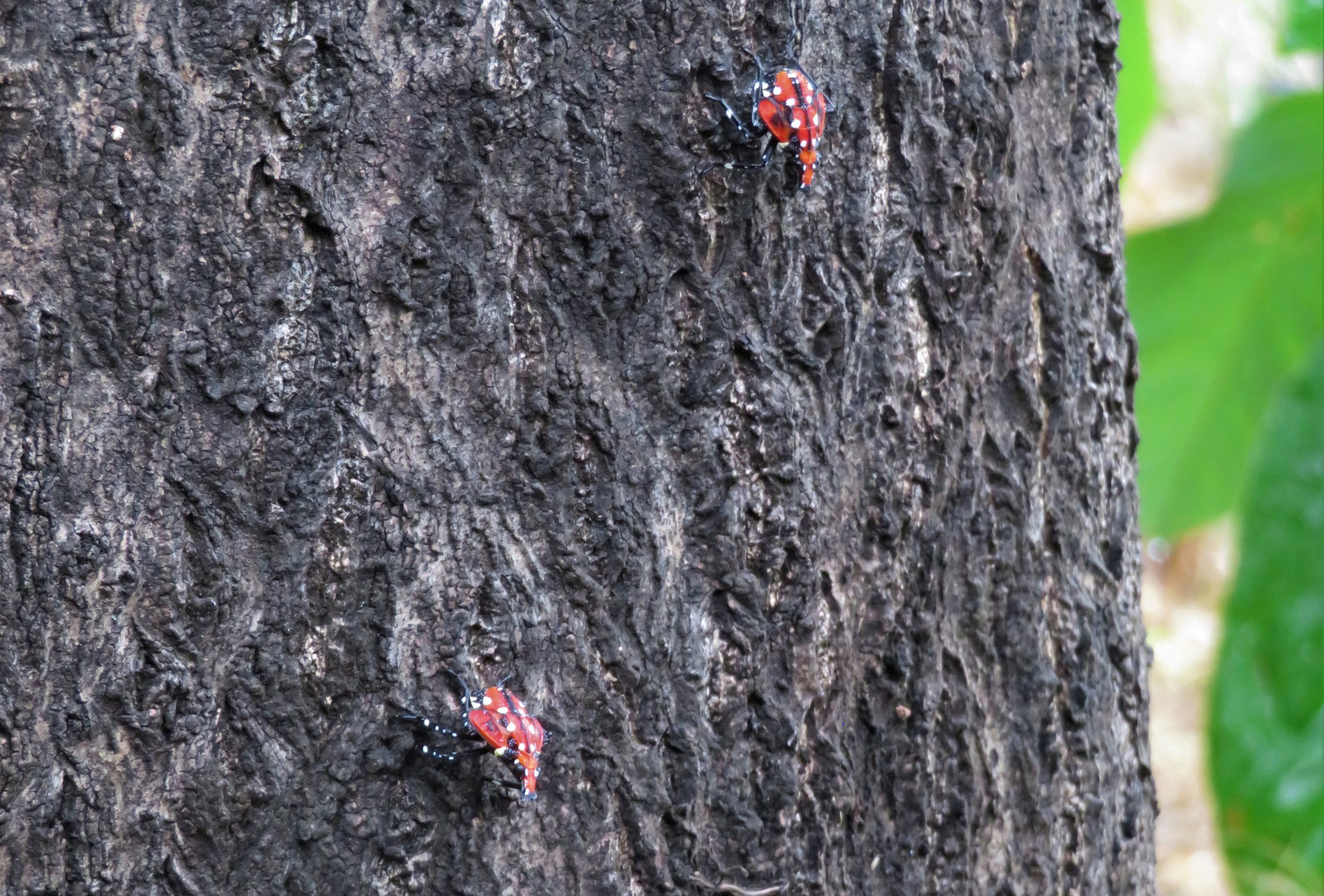 Spotted lanternfly 4th instar nymphs. These red nymphs can be found in July aggregating on tree-of-heaven. 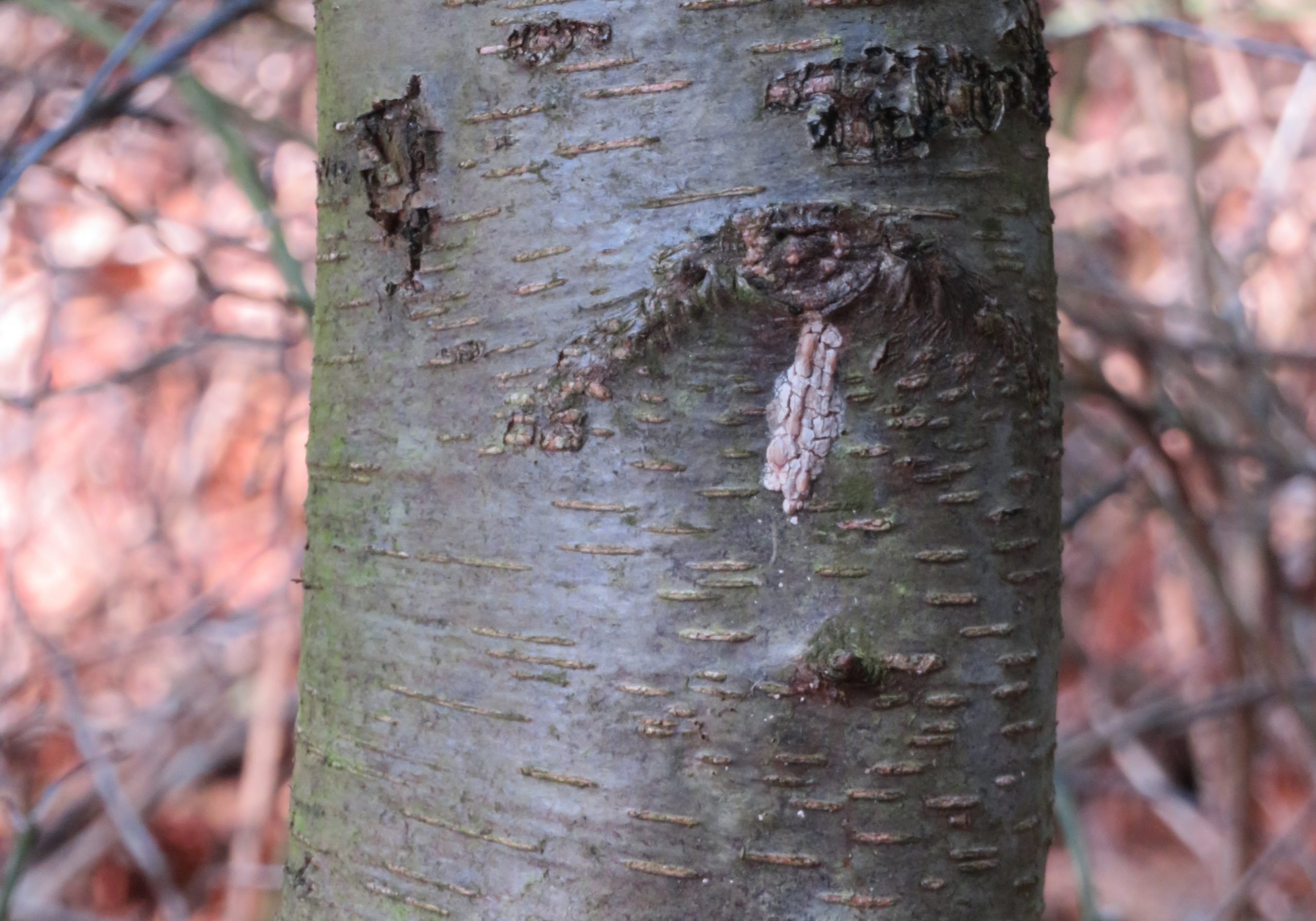 Spotted lanternfly egg mass on a black birch. Egg masses can be found during winter months on trees, vehicles and building materials.

In 2019, a small population of spotted lanternfly was found near the town of Bunker Hill, WV in Berkeley county. 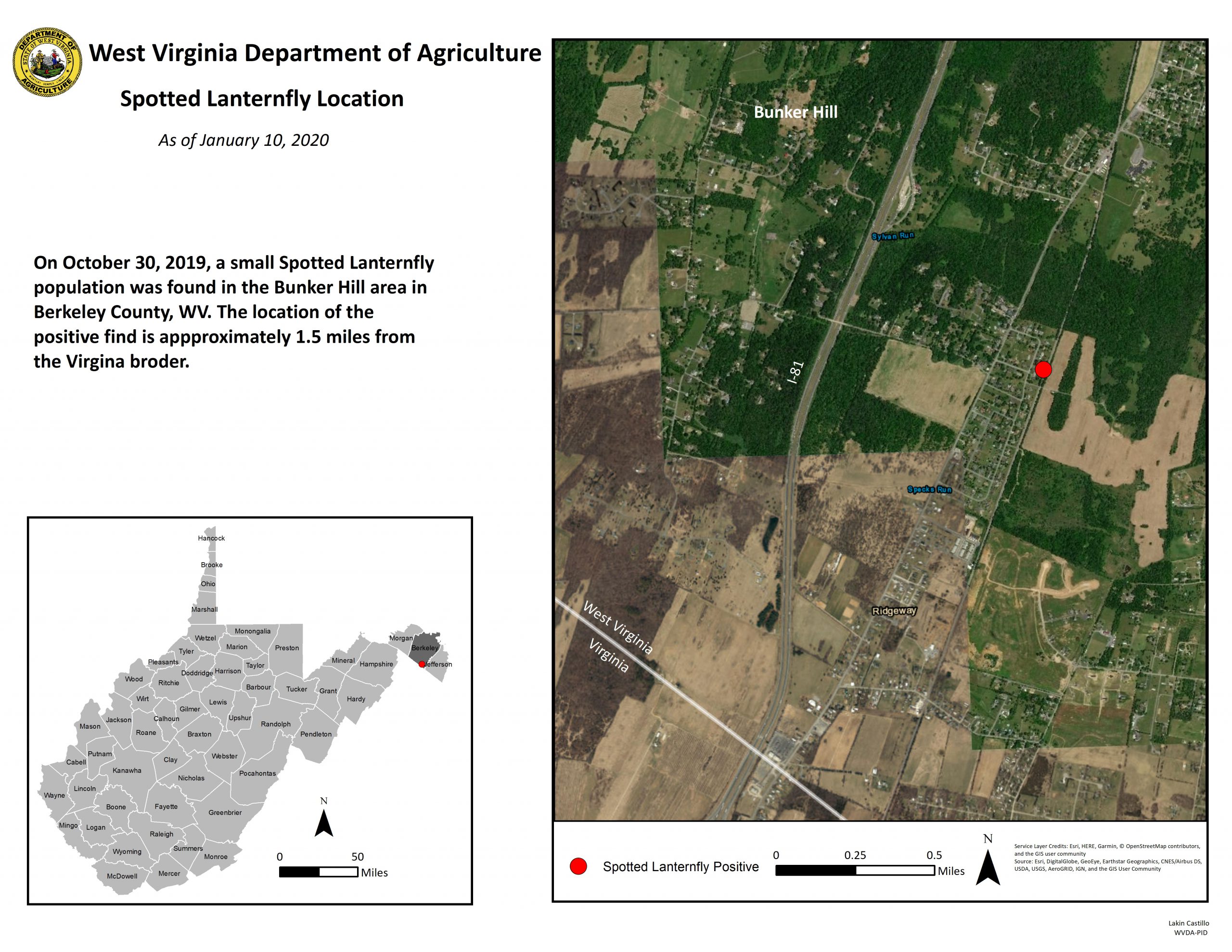 Bunker Hill in Berkeley county was where the first spotted lanternfly was discovered in West Virginia in 2019. 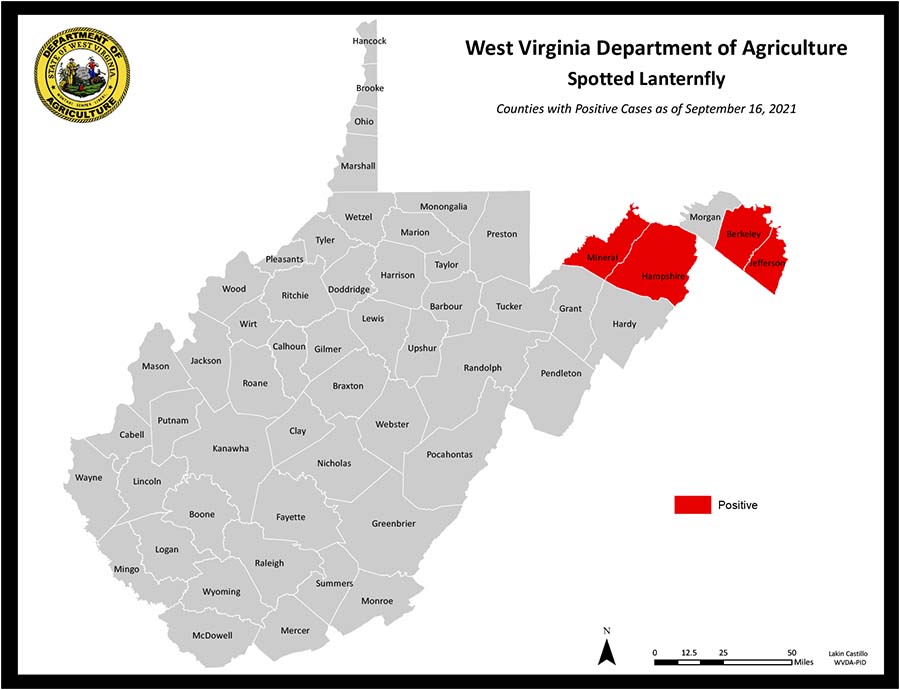 BERKELEY, HAMPSHIRE, JEFFERSON, AND MINERAL COUNTIES IN WV ARE THE ONLY COUNTIES WITH RECORDS OF SPOTTED LANTERNFLY AS OF OCTOBER 2020

Within this region of the state, often referred to as the Eastern Panhandle, there is a profitable orchard industry which could be affected by an increased spotted lanternfly population.  The West Virginia Department of Agriculture is diligently working to prevent the continued spread of spotted lanternfly with joint efforts including the USDA APHIS and other professional agricultural agencies.

If you have a sighting of spotted lanternfly please report it to the WVDA bugbusters detection email at bugbusters@wvda.us . If you can, please, include a photo of the insect before trying to kill it. In the email include as much detail about the location, date and insect activity.